Hope for Hasti: This is Chris Brannigan’s story. 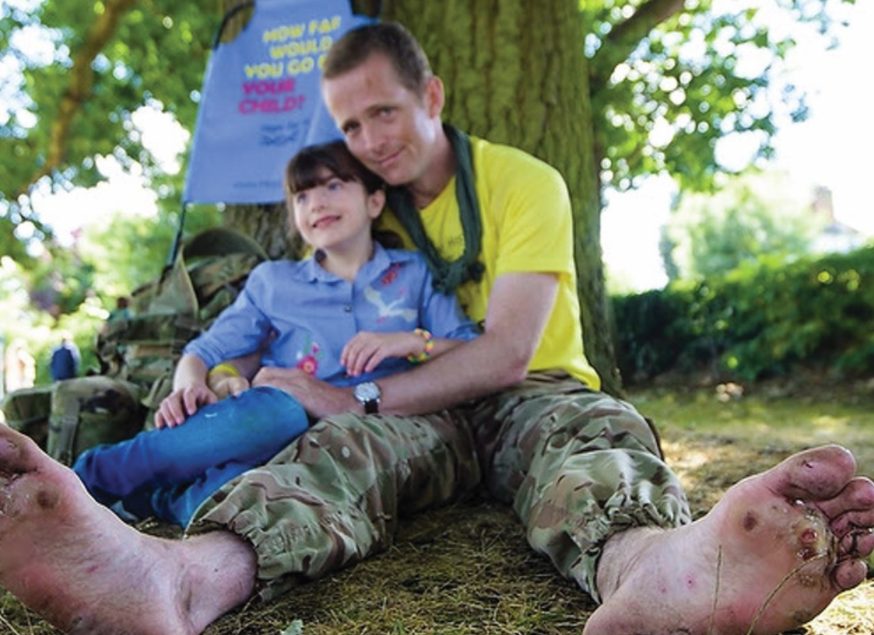 Would you walk 2000 miles barefoot with 55 pounds on your back to save your daughter?

Most people who hear Chris’ story tell him how brave he must be; he’ll be the first to admit that what fueled this journey felt a lot more like desperation than bravery, though. Chris’ daughter, Hasti, 9, was born with a rare genetic disease, Cornelia de Lange Syndrome (CdLS), characterized by developmental delays and reduced growth, which worsens in puberty, often causing anxiety disorders, depression, acts of self harm, and difficulty with verbal communication.

It’s rare that children with CdLS grow into adults with the ability to lead independent lives. At 9 years old though, Hasti already aspires to be both a chef and a ballet dancer, and Chris says that he and his wife, Hengameh, will do whatever it takes to beat the odds and make this a reality.

Hope for Hasti and other children with CdLS lies in creating a gene therapy and conducting clinical trials, which unfortunately requires around 2.5 million pounds to get underway. “I knew that to have a chance at raising this kind of money, a bike ride or walkathon wouldn’t cut it,” he tells me.

We had to do something that would reach people nationally and have them saying ‘Jesus, what’s that guy doing?’ This is how the barefoot idea was born.

Chris says within the first mile of his journey, he cut both feet badly; by day five he had tendonitis and infected blisters; by day thirteen, he ended up in the hospital, to treat and cover the wounds. After bandaging his feet, he was told he couldn’t walk on them again until they’d healed; instead of calling it quits, though, he simply asked for a pair of crutches and kept moving.

“I had lots of people with me, which helped—colleagues and friends, sometimes just strangers who came to join, offer food or water. Lots of people were emotionally moved to tears by our story, who I can only guess must have experienced similar things in their lives. The kindness and connections definitely helped keep me afloat,” he says,

I honestly don’t know how I made it, it was the most painful thing I’ve ever done in my life.

“But I couldn’t bear the idea of letting Hasti down or my family, anyone who believed I could do this.”

Still at only about 40% of the money they need to raise now, Chris admits that maintaining a healthy balance between work for the charity, two full-time jobs, his marriage, and caring for all three of his children requires a constant negotiation. One thing that’s helped, he says, is a conscious decision he made about a year ago when he found himself on the verge of a breakdown: if something needed to go, it would have to be work-related because this is what mattered least to him.

The next day, he went in and told his boss, who up until then expected the best of the best from him, he wouldn’t be able to deliver more than an average performance right now. “Work can become a compulsion, fueled by this drive to always go above and beyond,” he explains. “But I needed to put this energy elsewhere. It was a hard conversation to have, to admit I’d only be mediocre in my job, but I needed him to know where I stood.

At this point, everyone in my life had to know my priorities were centered around finding a treatment and trying to stay sane while doing so.” An average day now, he says, is spent writing emails, updating the website, speaking to people who might be able to help, and brainstorming what they’re going to do next. “There’s a lot of pressure,” he admits, “Because we’re so close and so far at the same time. And I know other parents who haven’t been able to reach their goals for treatment and we just can’t even conceive of this. So imagine then, with this on my mind, the kids want to play cards, go for a walk or be pushed on a swing, and I need to be able to have the energy and enthusiasm to do this. I end up feeling guilty about the balance a lot.

Because while we’re seeking a treatment for Hasti, we can’t afford to break our marriage. Or forget about the fact that our kids only have one childhood and they need us to be well for it to be a good one.”

To help Chris and his family reach their funding goal for genetic treatment research, visit Hope for Hasti