Everything immediately felt like it needed to be bigger 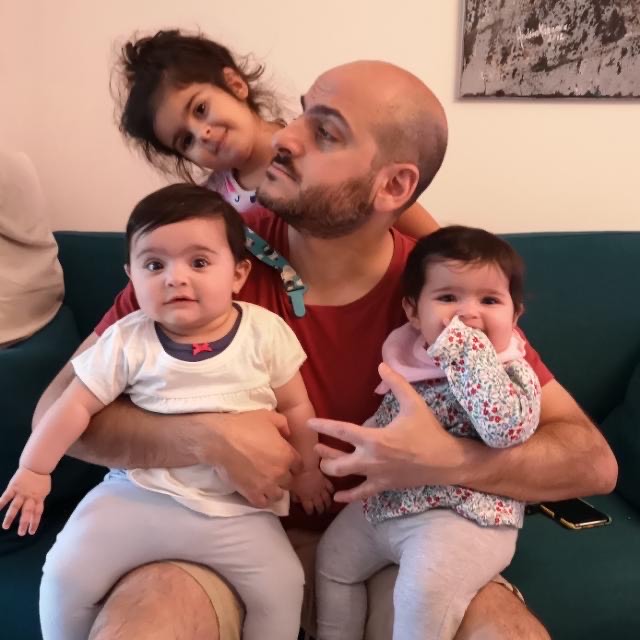 When I ask Alex what he’s found most challenging about raising his three young daughters — the twins, Karina & Cassia, two, and Aurelia, four — he laughs and says, “Sleep, of course.” His story is a version of what he expects most parents of twins experience: a mixture of shock, awe, and panic at the logistical aspects of how dramatically life changes with not one new baby, but two. “I remember my partner and I trying to wrap our heads around the news right after seeing the sonogram,” he tells me.

Everything immediately felt like it needed to be bigger— our car, refrigerator, house.

I was traveling a lot for work at the time also, which suddenly felt like a serious issue rather than a concern. Could we get family to help and if not enough, what did this mean for my job?” The first two years, he admits, were more demanding than he could have anticipated; with the lockdown in effect, he was able to share much more of the day to day responsibilities while working from home than he would have been able to otherwise, but that didn’t come without its own set of consequences.

“It’s only been in the last six months that I can honestly say I don’t feel like a total zombie,” he laughs. “I mean, I’m not going out to play golf or anything, but there’s a little more space in each day to work with now that they’re not infants anymore. I’m excited that they’re reaching an age where we can start having actual conversations like I do with Aurelia so I can get to know them beyond their basic needs. Right now, you know, they’re mostly still pointing and shouting at things to get my attention, but we’re getting there.”

Alex says he’s never been the kind of dad who believed in baby talk or relegating conversations to children’s topics alone; instead he prefers to speak to Aurelia similar to how he would another adult, even if some of it may go over her head. “I remember this one time we all went out to eat together with some friends while on holiday in Cyprus,” he tells me. “And she clearly didn’t like her food, which was not really kid-appropriate, so I’m trying to get her to make the best of it, like I would with a friend, rather than go about it like ‘Eat this or you’re in trouble’. I’m just having fun, trying to keep the blackmail and bribery to a minimum, hoping to make it fun so she’ll consider trying to be a little more adventurous, not really thinking anything of it.

As we’re about to leave, a guy who’s sitting at the table beside us comes up to me and says

‘Sorry to interrupt, but I really have to tell you that I loved listening to how you talk to your daughter like an adult. I’m expecting my first soon and this is exactly how I want to behave with my children.’

It was one of those rare instances, he says, where exactly what you want to come across in your parenting does for a moment and you get to feel proud of yourself, separate from all the other moments in the same day where you didn’t handle things as well as you could have.

As a general rule, Alex believes maintaining a nuanced sense of humor is an essential part of parenting; without it, he says, you’re far more likely to let the chaos of whatever is in front of you feel much bigger and more permanent than it really is and react accordingly. Whenever he feels stressed in a particular situation, he tries to take a second to see if he can adopt a different perspective and find a way to laugh instead. Sometimes this means grabbing his camera to take a few funny photos or videos of the girls mid-meltdown that he may or may not post later; when he pauses to document it instead of reacting to it, sometimes he finds it helps him get outside of the feeling state of disaster so he can see things more objectively.

As they get older though, he knows the situations will come with more tangible, significant challenges in each of their lives and it won’t always be as easy to do this, which is why it’s important to establish the precedent now. “I have no idea who they’ll turn out to be,” he says. “They might be musicians, footballers, play ice hockey or be trapeze artists. Each lifestyle comes with its own set of thrills, obstacles, and dangers, of course, and as a parent, it’s my responsibility, to prepare them for the challenge of going after what they want.

It takes a lot of courage to try things that feel beyond you and laugh with the mistakes and disappointments that come with exploring new territory.

Many people are quick to shy away from the initial discomfort and then later in life regret not exploring what they were initially drawn to. I never want this to happen to them. I want to show them how to manage their expectations, how to laugh in the face of adversity, even when it feels impossible, and always be able to pick yourself up and keep going.”

By I Have A Daughter