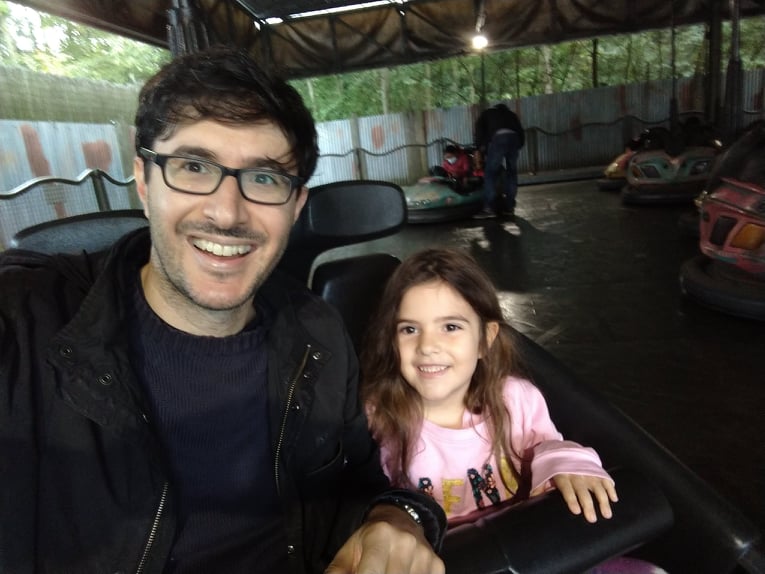 Fabrice will jokingly describe the last year with his daughter Stella, now six, as full of plot twists, all related to the unexpected development of a Miss Hyde to her Dr. Jekyll.  When Miss Hyde takes over, he says, it all depends upon who she’s with at the time as to what they can do to calm her down; if the tantrum starts with dad or mom individually, the other can often intervene and act as a balm; if, however, both of them are present when she is triggered, it’s extremely difficult to reason with her and the easiest way to temper it is with a third, neutral party, which of course isn’t always a viable option.

“From five to six, she’s changed tremendously,” he tells me. “And it has been hard on us to witness the extremity of her experience and not know what’s causing it. Sometimes she screams so loudly, like you wouldn’t believe, clearly overwhelmed by her own emotions, and all we can do is ask why, show our care and concern, and hope she’ll tell us.”

Unfortunately, he says, when the outbursts continued at school and her teacher at the time didn’t know how to handle them, this led to a few episodes like Stella trying to escape from the classroom, and they knew they had to examine what was going on further. He and his partner, Melissa,  arranged an appointment for Stella with a child psychologist to help find more permanent solutions to keep her calm.

At first, we started blaming ourselves

“It’s so easy to do. Like, maybe we praised her too much as a baby, told her she was beautiful and special all the time, so now she has an inflated image of herself and suddenly she’s in this environment where she can’t always be praised or get what she wants. But of course, the reality is that every child is different so how they process the changes and stages they’re going through can’t be the same.” Thankfully, he says, this year her teacher is older and more experienced, and Stella herself seems more grounded at six than she did at five so things are off to a much better start this school year.

At home, Fabrice does whatever he can to encourage her creative spark, which often involves the two of them happily drawing for hours or him reading stories to her, both in English and French, so she grows up able to read and speak both fluently.

She never tires of stories

“It’s always one more, one more, please just one more. We’re so close in these moments, she’s listening intently to every word, every answer I give to a question she’s asked. This is a feeling I always hope to have with her and, of course, for her to have in general with the friends she makes. When you have people in your life that know you really listen, who will offer you an ear when you need it, it makes it easier to handle what’s is in front of you.

When I was a teenager, I never felt comfortable telling my parents what was really going on, and it was hard on my relationship with them. So everything I do now, and will continue to do, is always with this in mind, to keep the conversation flowing and say what’s on our minds. I never want distance to grow between us from holding something back.”

By I Have A Daughter
dads of daughters, Growing pains, Raising the women of the future, Self-blame, Temper tantrums