This girl, she’s going to be a force in the world 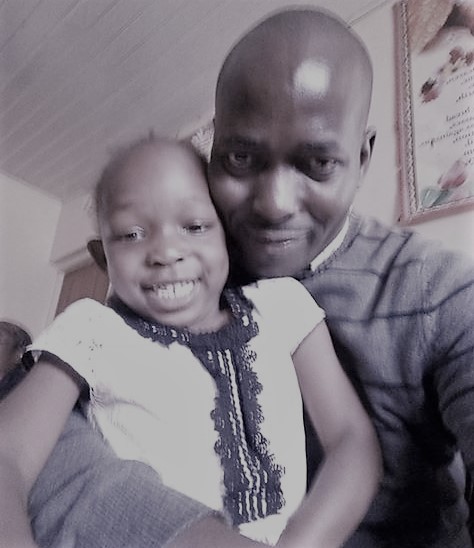 Benedictus O. says he could feel a connection to his daughter well before she was born; even before, he tells me, his wife knew she was pregnant, he knew, somehow, that she would give birth to a baby girl they would name Amanda Meghan. From the first moment he held Amanda in his arms, he could feel her power, see it in the wild, mischievous smile she gave him;

This girl, she’s going to be a force in the world.

And true to his prediction, at five years old, Amanda is already exceptionally thoughtful and outspoken, someone who is passionate about being involved with everything happening around her from being in the kitchen helping to cook the meals to working in the garden, learning about the plants and process of caring for them, to even trying to work out in the fields with the goats and sheep.

Up until not long ago though, it was a different story when they ventured out in public, especially when she would see other children. Amanda’s one limitation was that she born with a keloid on her right ear, an abnormality she was profoundly ashamed of and wouldn’t leave the house without something to cover it. Benedictus recalls this as the most painful part of being a father so far; he always intended to have it removed, but did not want to do it until Amanda was old enough to understand what was happening, and could be part of finding the right specialist to do it. There was also a matter of raising the money, even once they found the doctor, Benedictus admits, a feat which he likens to “climbing a great mountain” it was so arduous.

With this behind her, finally, he says Amanda now embraces every chance to be social and loves going school; beyond her studies alone, she likes that school is also teaching her about the person she wants to be. He remembers when she came home from school her first day and told him her teacher had encouraged all the students to share their fruit or snacks with those who didn’t have anything; she admitted she hadn’t wanted to share because they didn’t have anything to give in return. “No, my Amanda, this is not the way to think about it.” he told her.

Sharing is one of the greatest things you can do. Give fruit, a pen, a book, whatever you have when someone needs it. Don’t think about what you will receive back and your heart will be full.

The next day, he says, she followed his advice and shared the fruit he packed in her lunch; by the end of the day, she’d made three new friends; more importantly though, he says, she absorbed the meaning of the lesson and now lives by this value. You only need to tell her something once, he says, for her to take it to heart.

Benedictus says they have always carefully listened to one another as one of the highest forms of respect. “She makes me want to do better, be better, every day” he says.

And I speak for the fathers of the world now when I say we need to be instrumental in making sure our daughters feel the same way. That they are educated, respected, supported and know how to be self-sufficient.

Here, one out of every ten commit suicide. It’s up to us to live as examples of strength to encourage their own. I want my daughter to be confident enough in what she does to pass this hope on and live as an inspiration for others who need it.”

By I Have A Daughter
Africa, confidence, dads of daughters, inspiration, keloid, Kenya, self-sifficiency