To be a good father, my role will likely need to change throughout her life 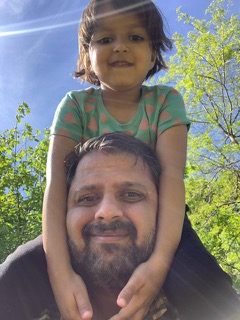 Sumit S.’s life changed completely when his wife landed a job in Switzerland that required immediate relocation and for he and their five year old daughter, Miraya, to follow from India six months later. In a role reversal, Sumit, who had a strenuous, demanding work schedule in India, is now a stay at home dad for the moment, while his wife works long hours, and has more free time than ever before in his life.

And while he’s grateful for the circumstances, which have given him a chance to slow down, pick up skills like cooking for his family and learning the city so he can organize adventures for them, he also admits that he feels lost some days, and even a little scared. At six years old, Sumit lost his own father, so he openly admits that he never knew what a father’s role was exactly and still feels like he’s improvising as he goes along. All he’s certain of is what he intuits from how Miraya looks at him, which makes it clear that she feels like as long as he’s around, nothing bad can happen to her.

To be a good father, my role will likely need to change throughout her life

“So for right now, yes, letting her know that if she falls, I’ll be there to pick her up is important. But as she reaches teenage years, to take a step back and see how she’s negotiating her own battles. To be more of a trusted role model and friend, if possible, but doing less things for her when I believe she could handle them herself. And as she reaches her 20s and beyond, more of a mentor role, so she knows she can talk through anything she needs to, but that my opinion simply comes from more years on the earth, not because I necessarily know better than she does.”

As the one who’s there to pick Miraya up from school now, hear about her day first, Sumit says it’s moments like these, watching her face light up as she spots him among the other parents, that give him the strength to be as resilient and solid a presence as she needs him to be, even when he doubts his ability to do so.

In addition to the dramatic shift to their daily routine, Sumit also explains that the move is taking some time for all of them to adjust to culturally as well. French is the primary language in their part of Switzerland, which made it difficult at first for Miraya to interact with the other kids, who tended to prefer it over English, despite that being the main language at her international school. Also, as opposed to in India where Miraya only attended half-days at school, now she has a full day plus additional classes afterwards in music—a common theme for the children in Switzerland, even as young as she is, who often have 2-3 extracurricular classes.

“So the fact that this is an emphasis here is a welcome change, even though the long days are taking some getting used to for all of us. My hope is she doesn’t grow up stuck in one area, like an artist or an academic or an athlete, but someone who has a broad appreciation of all of those things. While we plan to encourage her toward a career as a doctor or a physicist, something definitely in the sciences, we also think it’s important she can play an instrument, appreciate a symphony, stay physically fit, and express herself through an artistic medium of some kind. And yes, we know it’s a lot to expect, it’s everything really, and that all we can do is try to be the best guides we can be, show her all the good things there are to experience, and then step aside as she decides what she wants her life to include.”

By I Have A Daughter
dads of daughters, guiding, parenting, stay-at-home dads