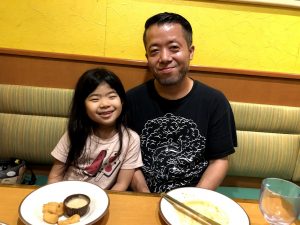 As a self-trained, multi-instrumentalist, Tucker Electon says he’d always hoped to be able to share his love of playing music with his daughter, Karen, 9, so she could have a head start in pursuing her own relationship to a specific instrument or genre, if she wanted — something he didn’t have growing up, as neither of his parents could relate to his musical inclinations. As it turns out though, Karen actually inherited his drive to figure out things on her own, and to not want to be interrupted while doing so.

As she was immediately resistant to my attempts to teach her music, rather than keep offering, I just began leaving instruments around and trying not to look excited when she picked them up and began playing around with them herself.

“Even now, I have to watch myself if I hear her struggling with a chord or whatever, because if I show her how to do it on my instrument, explain a better way to approach what she’s trying to play, she gets frustrated and asks me why I did that. She always wants to discover it on her own, even if it takes much longer.”

Her appearances in his music videos, he says, occur in much the same way — if he asks her ahead of time to participate, she’ll likely refuse, but if he starts creating and filming the scenes and then simply asks her if she can stand there, hold this, wear that mask, she’s willing to participate.

There’s something about witnessing the execution for her that seems to make the difference.

“If she can see how her part is useful to the whole concept, that changes her mind. Same with when I’m editing — if she walks by while I’m arranging the clips and I ask her if I can show her what I’m doing so she can give me her opinion, she’ll open up to it and tell me honestly what she thinks.”

And while the last two years of COVID have been difficult on their family both financially and for him as a performing artist, he acknowledges that it’s brought him a lot closer to Karen than he was before. Even though he’s always been making videos and music around their house, he says, it wasn’t until the pandemic hit and they were home together for months at a time that he began actively trying to involve her in the things he was creating as a way of spending time together — something he says he can’t remember ever having a chance to do with his father growing up, as he was always too busy to get involved in any of his creative projects.

When it comes to Karen’s own individual interests, he says even when he can’t relate — her recent passion and fixation for horses, for example — he likes to take the role of curious observer and let her explain and show it to him, so he can understand how to best support it, if that’s what’s needed. “Growing up, my parents mostly left me to explore my own little world of music because they really didn’t understand it. Sometimes I wish we could have shared it, of course, but this also led me to a certain kind of strength I have in my musical expression and opinions, which is something I want for her as well,” he tells me.

She doesn’t need my input on something I know nothing about.

“I see it as a chance for her to teach me about the value, the magic, the joy in it whatever it is, without my influence, which could potentially interfere. By the time I have anything to say about it, I want her to be so sure in how she feels that nothing I say could change that. I think in giving her the freedom to do this, she’ll get to show me who Karen is, who she wants Karen to be, rather than the other way around.”