Dad of three daughters: The dynamics of trilateral relations 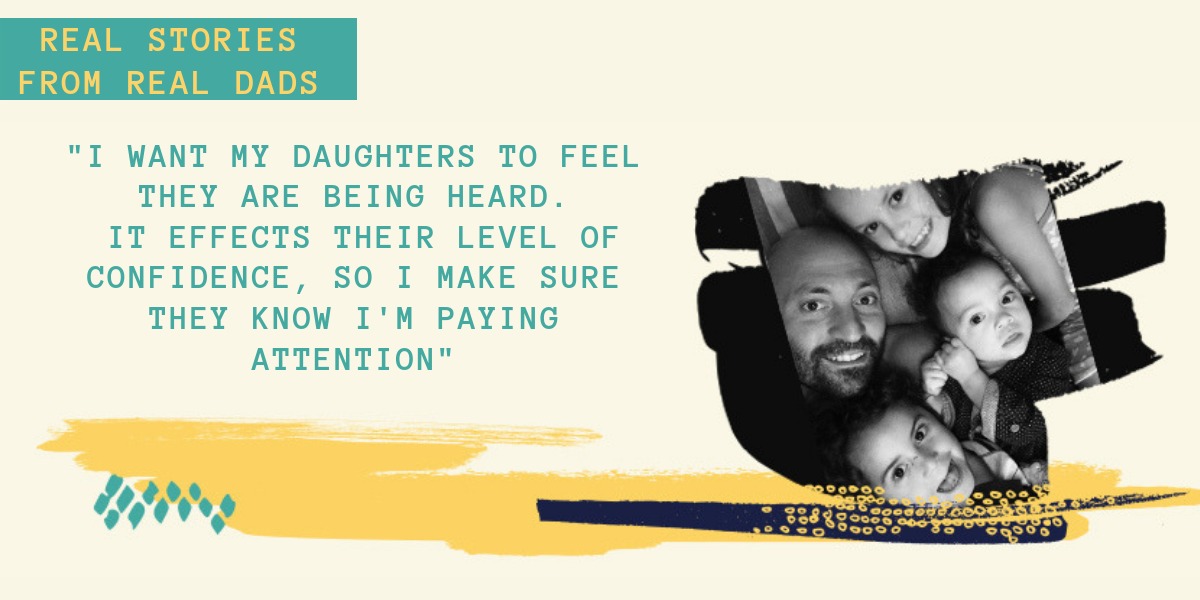 Stefano C. is an entrepreneur with multiple ventures going at any given time. An average day can present him with the full spectrum of temperaments in his business dealings and require he keeps his cool no matter what might get thrown at him. Surprisingly, he tells me, it wasn’t his line of work that gave him the real motivation to stay level-headed under pressure, though; it was his three daughters who taught him the value of patience.

I used to be pretty temperamental, he laughs. I’m passionate by nature and it kind of comes with the territory. Once I became a father though, most of it just didn’t seem worth getting worked up about anymore.

Now when I see my oldest daughter, Alessia, so stressed, I can try and help her relax because I’ve set an example that this is a better way to solve a problem. If I was freaking out about everything that didn’t go my way, or all the things that could go wrong in any given day, how could I turn around and tell her to stay calm? It doesn’t work like that.

She has her eyes on me at all times and often uses my reactions to determine what hers should be.

Of his three daughters, nine-year-old Alessia is the one he worries about most. “She’s fragile,” he says. “Whenever she overhears her mother and I discussing a problem, something simple like a repair we need to make, or if I have a stomachache, let’s say, she immediately starts to worry that it’s something serious. And she can’t be reassured easily, either. She is extremely analytical so if we tell her not to worry, our reasoning has to be packed with details that support it. I find myself trying to make sure not to talk about anything difficult when she’s within earshot. All this worrying affects her confidence.”

Five-year-old Adrianna, the middle daughter, however, couldn’t be more different.”She’s virtually fearless,” he tells me. “She even gets into fights at school sometimes because she simply won’t back down. Nothing intimidates her. When she decides her stance on something, she does so whole-heartedly and never wavers.” And while Stefano works to help her temper the extremes of this, he also appreciates how much her natural audacity helps Alessia.

“Recently, someone pulled a terrible prank on YouTube where they inserted a scary face called ‘Momo’ into thousands of children’s videos. Momo cruelly teased kids and dared them to do things like kill themselves—-really sick stuff. Momo came up for Alessia a few times at school when she was watching something with her class and it really scared her. When she came home still upset, it was Adrianna who told her not to worry, that it was created to scare you, yes, but it’s not real, it’s just an image on a computer that can’t do anything to you. She looked to me to see if I backed her up and once she saw we were in agreement, she was finally able to relax.” For Stefano, the most important part of being a father is making sure each of his daughters feels heard.

“Giovanna, my youngest, is only three,” he tells me. “Which means, of course, our conversations are limited, at the moment. When she tries to communicate with me though, I make sure to listen and nod so she knows I’m paying attention. Even if I can’t understand what she’s saying. I see a lot of parents dismiss their kids or say something like ‘yeah yeah yeah’ when they’re going on about a subject they aren’t interested in. I promised myself I would never do this. I know it affects their level of confidence.

I want my daughters to feel empowered, to see I care about what they say, and I know the first step is simply knowing, My dad is listening to me. I’m important.

By I Have A Daughter
active listening, entrepreneur dad, knowing what's important, paying attention, quality time, role modeling how to problem solve, they are always watching us, values