Children with special needs are superheroes so why not draw them this way? 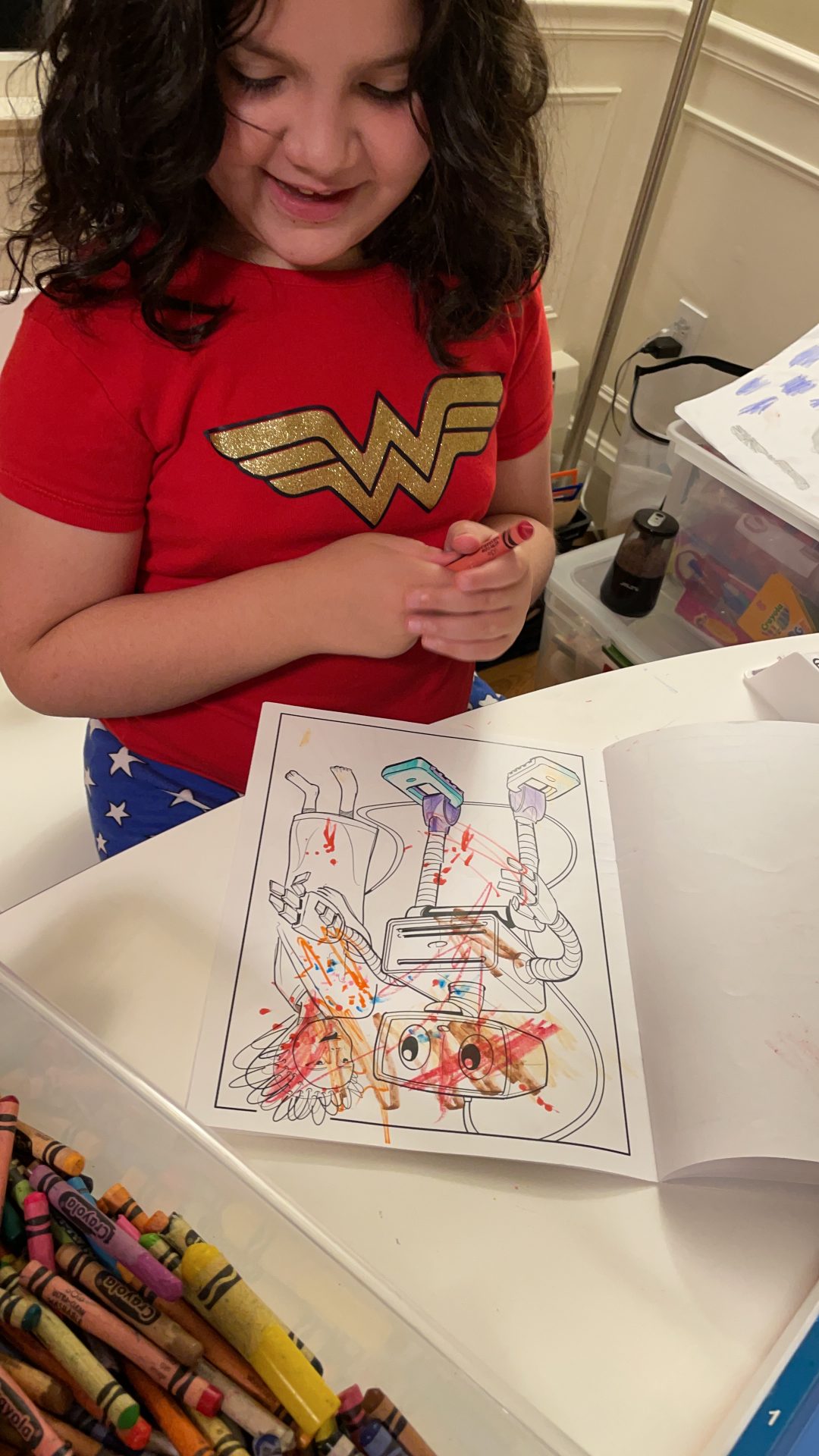 John A. says he knew when his first daughter, Kyriaki (or Kyki, as they call her), now 9, was born on her Greek name day that there would be something special about her; a superhero, however, as he calls her now, was not quite what he was expecting. Around the age of two, John and his wife, Panayiota began to notice Kyki wasn’t walking as easily as she should be and decided to take her to a doctor for a check-up.

“This is where Kyki’s story really begins,” John tells me, “Because from then on, we went from doctor to doctor, hearing everything from it’s nothing, she’ll start walking soon enough, don’t worry, it could be autism, it’s definitely autism, here, take this pamphlet and check out your options. Panayiota, his wife, however, wasn’t having any of it. She knew something was going on with Kyki and that none of the doctors we’d seen had figured it out yet.”
After over a year of misdiagnoses, they finally met with a doctor in NY who suggested genetic testing (a costly, but conclusive approach) so they could finally have a definitive answer. The results showed their instincts were correct: it wasn’t autism, but BPAN (beta propeller associated neurodegeneration diagnosis), a rare genetic disorder only discovered in the last ten years or so with five hundred or so cases diagnosed worldwide.
At 9 years old, Kyki is non-verbal and has to use an augmented communication device in order to express her needs, pressing buttons for things like water or ice cream and quantities, like more, please. She still wears diapers, a reality that may never change, and her body temperature runs hot, which affects her mood significantly and can easily lead to meltdowns, John says, if she doesn’t get what she wants—which means she usually does. Her unique challenges aside, though, when she’s in good spirits, she has a sweetness and light about her that can make anyone smile who comes in contact with her. “She’ll look you straight in the eyes and won’t look away,” he says.

This is how she connects. She’s not afraid of being seen or letting others know how much she enjoys seeing them, even if she can’t put it into words.

John and Panayiota also have two other children—Kostas, 7 and Antigone, 4—who are still coming to terms with Kyki’s limitations and how that affects their family dynamic. Play is a much different story for Kyki than for the other children; while she may pick up a toy, like a Barbie, she doesn’t have in mind to use it as a way to interact, as Antigone would. Instead, they often end up having to do their own thing nearby while Kyki does hers. Rather than games or toys, Kyki’s favorite way to play is dancing, especially to workout routines on YouTube.
Despite her limited range of motion, John says, he knows in her mind she’s executing all the choreographed moves as flawlessly as she sees them by the look on her face.  “I know it’s hard for Kostas and Antigone to accept how much more attention we give to Kyki, how every outing revolves around how she will handle it as to whether we’ll all be able to enjoy it,” he admits. “But, for the most part, they pitch in and help us help her. And you can’t understand how grateful I am for this. I never say it out loud, but we’re counting on them, you know?

If anything were to happen to us, we need to know Kyki will still be taken care of and no one’s going to do that for you besides family. We’re all she has.

Faced with the reality that the road ahead for Kyki’s continued care will be both a challenging and expensive one, John began to brainstorm what could he do to raise money and awareness beyond simply asking for donations, which didn’t feel right. “We are inundated with causes that deserve to be supported,” he explains. “We’re in a group with special needs parents, all of whom have fundraisers from time to time for the same reasons we’d run one.

It’s painful to feel like you’re in competition for someone’s sympathy. This can’t be the only way.

The idea he was looking for came when putting together a last minute birthday present for a friend’s son, Dimitris, who’s wheelchair-bound with cerebral palsy; rather than make a simple card, he drew him as the Incredible Hulk from the Avengers complete with his leg braces and printed it out as a poster. The gift was a huge hit and from there the idea for the Rare Adventures coloring book was born. “Children with special needs are often referred to as superheroes,” John tells me. “So I thought why not draw them this way? A coloring book gives them a chance to see themselves this way also, rather than always looking at pictures of kids who can do what they can’t. And beyond just being a joy for them, this is something all parents could feel good about buying because it can help start this important conversation with their children who don’t have such limitations. Kids can be scared to approach a child with special needs simply because they don’t understand it;

the more we can normalize it, at home and at school, the easier it will be for these kids to feel like they’re part of the same experience, rather than outside of it.

Yes, Kyki is a superhero, she has special abilities and needs, but she’s also a 9 year old girl, and as much as she can feel like other 9 year old girls, welcomed by other kids, the better her life will be.” 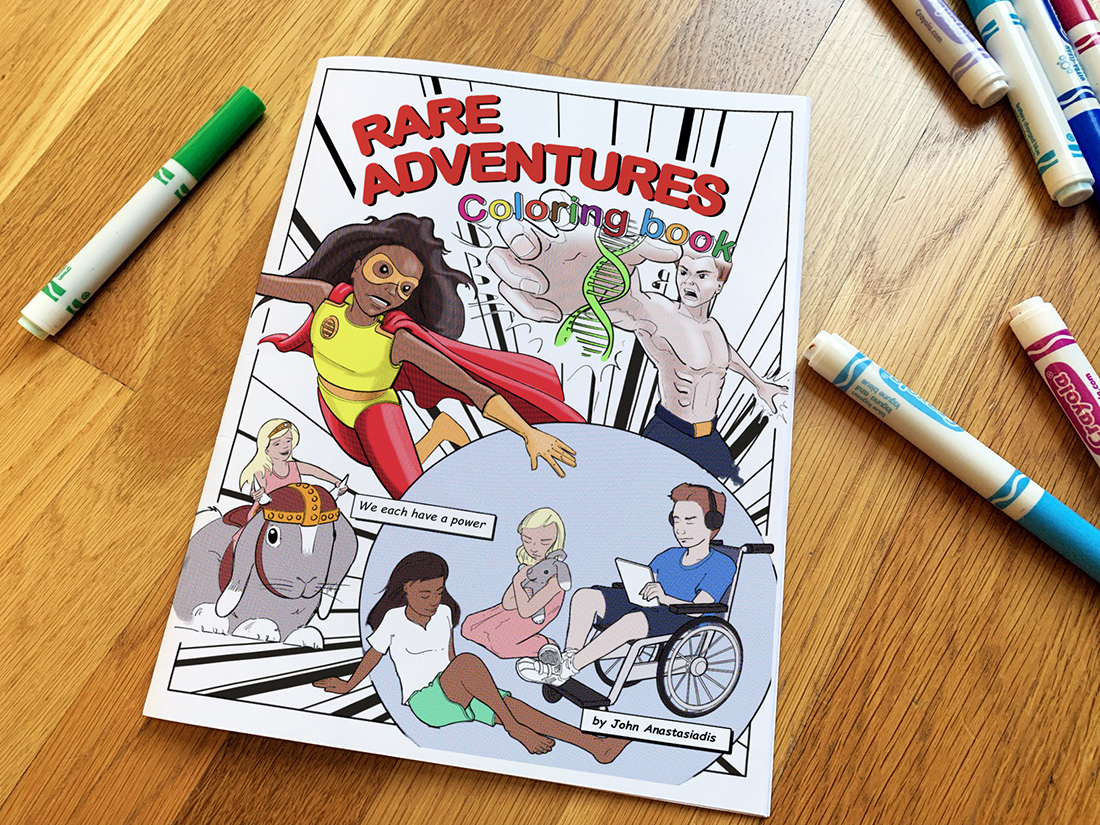