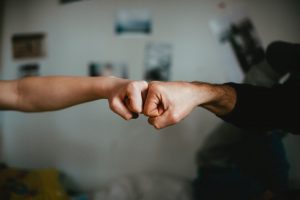 David O. always jokes that his daughter, Chloe, now 15, never really did baby talk — it was zero to Shakespeare, he says, total silence and then fully formed sentences that expressed exactly what she was feeling or what she wanted in a way he stood in awe of, certain he never even spoke like that despite having had a lot more time to practice. “Honestly, I haven’t stood a chance at winning an argument with her since she was three years old,” he laughs. “So it’s a good thing we don’t have too many of them.”

Their most meaningful exchanges, he says, tend to take place in the car en route somewhere to the point where it’s become an unspoken rule between them: if there’s something that needs to be discussed, create a destination to allow that conversation to happen. The most challenging aspect of these heart to hearts, he admits, is understanding his role — most of the time, she just wants to vent, and isn’t looking for advice or help solving the problem, and isn’t afraid to tell him as much (should this be as such).

A recent example is the bullying Chloe has been facing at school related to her transgender identification; it’s excruciating for him to hear about it and not get involved. “Overall, the teachers and staff are very supportive, and of course, her friends are incredible and always have her back,” he says. “But we all know how teenagers can be.

Some days, she says she just can’t bear to face it and you know, I get it.

I hate to ever have to be the one to send her knowingly into a situation like that —- and yet if I attempt to interfere, most of the time she asks me to just let her handle it so I have to try to respect that.”

One of their chief sources of conflict prior to her entering high school, he tells me, was her relationship with homework — specifically, not seeing a reason to bother doing it. “Chloe has both an incredibly high IQ and difficulty staying focused, so she has her own way of doing things and rationale behind it,” he laughs. “To her, it’s obvious she understands what she’s being taught so she doesn’t want to waste the time she has after it’s over doing what feels like the equivalent of repeating herself. She’d rather be singing, for instance, working on her range, as she’s already been scouted by agents for her voice, or voraciously reading about whatever she’s fascinated with this week.”

She has an incredible ability to retain an encyclopedic amount of detail about anything that catches her interest and for her, that should be proof enough of her intelligence  — not homework.

Naturally, David says, he was concerned with how developing a habit of not completing assignments could impact her later in life, but thankfully her teachers have stepped up and been willing to work with them to make sure Chloe can keep her grades up. “Too often, if you’re a different kind of learner that doesn’t fit into the school system you’re in, well, too bad for you,” he says.

“So we’re fortunate that her teachers are willing to persevere and see how much she has to offer, even if she can’t always stay focused on exactly what they ask of her.” Sometimes though, he admits that it’s also up to him to be more proactive with finding creative ways to insist she do the work.  “She’s easily as clever as the people in my life I admire most, so much so that I can forget that she isn’t just one of my best friends, but also my daughter who’s still a child and needs both instruction and discipline at times.”

Learning to do the things you don’t want to do with a measure of grace and integrity, and dare I say it, even discovering your own ways to make them fun — this is how maturity is built.

By I Have A Daughter
Bullying, homework, safe space, transgender kids